Red dwarf Gliese 3470 is located 96 light years away from the Sun. It is a single star of spectral class M2.0Ve, that has 51 % of solar mass. There is at least one exoplanet in this system.
Sun distance
96 light years

Astronomical database SIMBAD (the Set of Identifications, Measurements and Bibliography for Astronomical Data)

Archive from the TESS mission
Class of stars Red dwarf

News from this star system 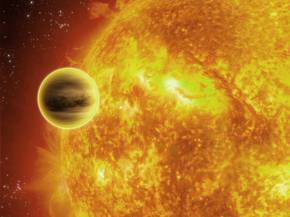 Exoplanet Gliese 3470 b is the first superearth with measured atmosphere

Read more
Get your next news from nearby stars
This is a new project, and partly still in developement. There will be soon more information and functions. We would love your support on social media.